While others watch movies that instigate fear, HRs experience the panic of possible bad hiring every single time they encounter a candidate. Identifying the right candidate can be a huge task if not conducted correctly. There are a number of major and minor reasons or obstructions as to why final hiring decisions are not always accurate.

What, according to you, can possibly affect a hiring decision?

Yes, it is undoubtedly either the human biases on the recruiter’s side or the falsification of strengths, abilities, and merits on the applicant’s profile. 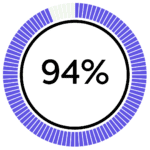 This is the reason the entire traditional hiring process is slowly being replaced by digital recruitment tools. The 21st- century recruitment processes are gearing up to assess candidates thoroughly in job-specific skills and competencies. A survey by ThriveMyWay records 94% of HR professionals reporting positive hiring outcomes using recruitment software. Are you one of this 94% of HR professionals? Or still, looking for more clarity on understanding how these tools work and which one to opt for?

In this article, we will be discussing what biases affect our decision-making ability unconsciously and how candidates, sometimes intentionally or unintentionally, manipulate their behavior or responses during interviews to get favorable results from the recruiter. We will also speak about the mechanism of bad hiring choices and suggest solutions that can ensure right hiring decisions.

As stated above, the factors leading to biased recruitment practices can either be influenced by a candidate or expressed unconsciously by recruiters. While the ones with candidates are mostly expected, the ones coming from a hiring manager are unacceptable.

The candidates’ desire to get the job post can justify their act of deception and cannot be prevented. However, the fault in an HR’s perception is questionable if it results in a bad hiring decision. Lets take a look at them one by one –

Questions like “Why should you be hired?” or “What are your strengths and weaknesses?” allow candidates to take an upper hand with the creative impression management tactics of verbal exaggeration and non-verbal self-presentation. It results in the possibility of strong first-impression-bias, influencing the hiring managers to favor the applicant.

Below are some theories given by psychologists that justify the claims of intentional and unintentional biases of a hiring manager.

I Don’t Know You, So You Are Right!

The belief of the recruiter that the candidates they encounter are likely to be truthful is because it is simply difficult to detect lies.

This phenomenon influences a recruiter’s perception, believing received information as true most of the time instead of being watchful. It also increases the chances that the bold statements of an applicant will impress the interviewer, irrespective of their genuineness. Hence, candidates when read about best ways to present themselves in an interview, focuses on how confidently they can establish their point of views, though be false and manipulated.

‘Statements braced with confidence, makes it difficult to examine the authenticity’

So how will you make sure you don’t fall prey for such tactics used during interviews by the candidates to impress you? Human biases are inevitable, but not your hiring decisions, our ebook on Mindful hiring speaks about how objective hiring helps you eliminate these biases with ease.

You Only ‘SEE’ What They ‘SHOW’ You

But, this method can either get you a good candidate or a fake performer depending on the back story.

Also, some expressions might not be clear as reactions often overlap, with many insignificant situational factors. If we still stick adamantly to traditional hiring it will be a real disaster move on the side of hiring managers. Unfortunately, 33% of recruiters still assume the candidates’ eligibility in the first 90 seconds, as per reports Undercover Recruiters 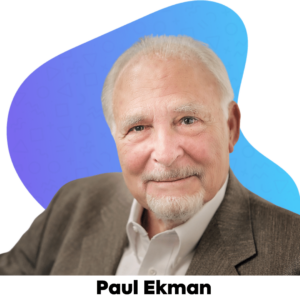 Even with a guide of Paul Ekman’s 4 deception rules, how accurate are these beliefs about traditional hiring? The Mindful Hiring Handbook helps you understand how candidates use these 4 deception rules to manipulate recruiters’ decisions in their favor.

Lying Candidates: Drive To Fake In a Job Interview

A clap of hands requires two to make a sound. Similarly, the process of wrong hiring practices involves an equal contribution on the part of the recruiter as well as the candidates. You may go through numerous guides on how to catch a lying candidate in a job interview.

On the other hand, the job interviewees come prepared to remain aware and maintain their responses throughout the interview. The world of lies for an applicant revolves around the drive and the desire to attain the job post.

Our e-book explains the complete internalized processing of the lie mechanism in a candidate. How the context and self image of an individual affect self-presentation and influence hiring managers’ decisions. Here are a few snippets to read;

The Action Was Only Compelled By The Situation 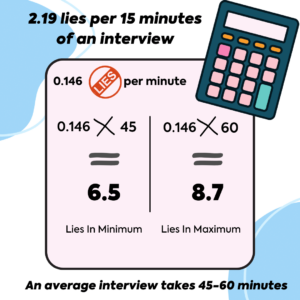 HBR reports that participants in the study speak an average of 2.19 lies per 15 minutes of a job interview. And there is another study that claims the average time a job interview takes is around 45-60 minutes. Now imagine the number of casualties a hiring manager suffers while conducting a traditional job interview. 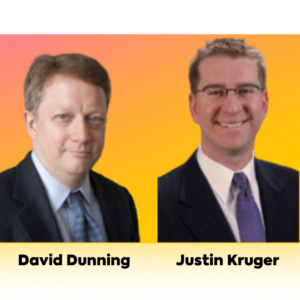 An Empty Vessel Makes The Most Noise

Talking about conscious lies that expert recruiters can still identify and dodge better than the newbies. But what if the lies are internalized as truth by the candidates themselves? David Dunning and Justin Kruger proposed the idea of cognitive bias. Where people who aren’t very skilled or knowledgeable, carry a misperception that they possess higher knowledge or skill. 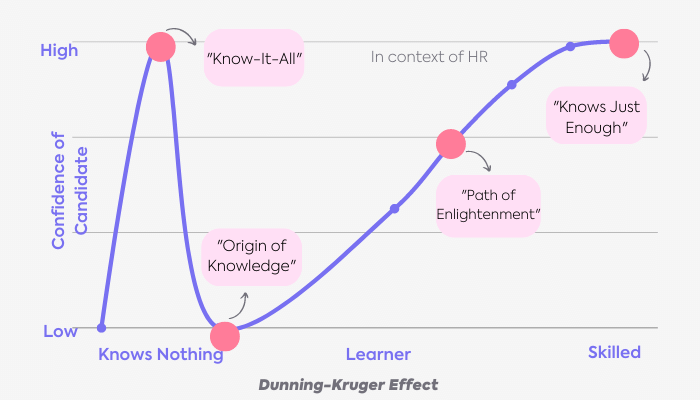 And contrast, low on confidence even with more wisdom. A checkster survey claims, 78% of candidates will admit or reconsider misrepresenting their skills in the job interview after 6 months of working on the job post. The candidates realize their true skills after working on the post for some time, or more directly after earning some knowledge about the responsibilities.

Maybe, The Mode Of Job Interviews Are Faulty?

Did you know? 42% of hiring managers believe recruitment bias is a problem of traditional hiring, according to LinkedIn. The mode of interviewing might be at fault, as it is dependent on the recruiter’s perception of the candidate and loaded with unfiltered information from candidates.

In-person interviews: Many good matches are rejected due to flaws in body language. A statistic from Legal Job shows, 39% of the candidates get rejected due to overall confidence level, lack of eye contact, or smile.

Telephonic Interview: Tonality matters a lot in the ‘get to know you’ first interactions. Biases start from the very beginning of the encounter. The voice quality often adds volumes to one’s personality. For instance, a soft voice is expected from a polite applicant.

Virtual Interview: The modern-day remote interviews are not free from biases, as there is always a chance of miscommunication or misinterpretation due to limited means of assessing the candidate’s body language.

The evolution of hiring strategies has been a constant for every HR department. This phenomenon clarifies how even a team of recruiters working together is susceptible to bad hiring decisions. Traditionally, candidates were presented before the interviewer and interrogated with certain general questions. To avoid a bad hire, it is imperative that one must adopt scientific recruitment practices in assessing, training, and appointing candidates.

Some effective ways to reduce hiring biases are;

PMaps cannot preach to the candidates to present themselves honestly. However, we can help recruiters make informed hiring decisions for their organizations. Our ebook will help you understand the internal mechanism of human biases in the context of real life job interview scenarios while also providing guidance to reduce and eliminate bad hires.

Scientific assessments enabled with lie scales are the best alternative hiring tools to filter candidates. Using our tools, you can interview the applicants who are aligned with your organization with regard to skills and culture.

Mail us at v.rokade@pmaps.in for more information. You can also connect with us through our website. Book a free demo of 30 mins with our experts for better clarity about our products and services. The early bird gets the worm! Download the handbook of hiring biases to prevent bad hiring decisions and loop the best talent to onboarding.

Human Biases Are Inevitable, But Not Your Hiring Decisions: Handbook Of Mindful Hiring

If you missed our previous newsletters, this handbook is a one-stop guide to understanding the Human biases that occur in real work situations. It is a complete guide on hiring biases for experts as well as beginners in the hiring industry.

It unwraps the possibilities of candidates’ behavioral presentation that often intends to influence hiring decisions. Furthermore, it attempts to reveal many unconscious and conscious biases of an HR through the process of hiring. 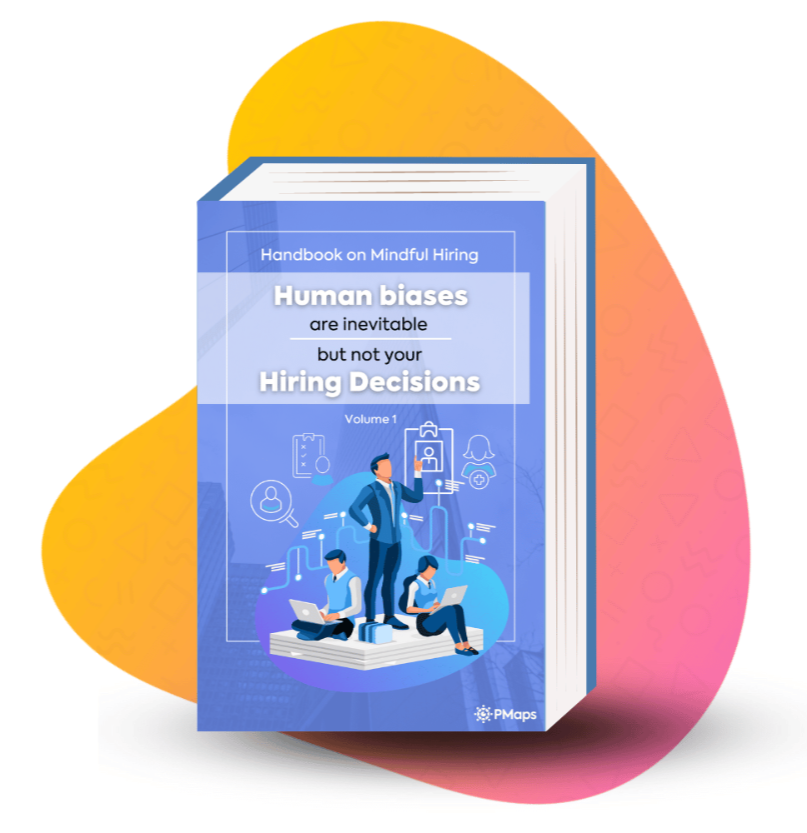 Our efforts are to make the HR professionals aware of trending hiring solutions that make their recruitment function smooth and accurate in this difficult era of talent war. The methodologies envision the future of hiring and interviewing teams with the rightful use of advanced tools. Enabling every employer to assess their candidate’s fitment into the organization bias-lessly.

Ever since the age of 10 years, she has held an immense interest in writing. The young, professional Gen-Z writer now holds an experience of 4+ years in SEO Content Development. She is an equally avid psychology learner and research aspirant.

We use cookies on our website to give you the most relevant experience by remembering your preferences and repeat visits. By clicking “Accept All”, you consent to the use of ALL the cookies. However, you may visit "Cookie Settings" to provide a controlled consent.
Cookie SettingsAccept All
Manage consent

This website uses cookies to improve your experience while you navigate through the website. Out of these, the cookies that are categorized as necessary are stored on your browser as they are essential for the working of basic functionalities of the website. We also use third-party cookies that help us analyze and understand how you use this website. These cookies will be stored in your browser only with your consent. You also have the option to opt-out of these cookies. But opting out of some of these cookies may affect your browsing experience.
Necessary Always Enabled
Necessary cookies are absolutely essential for the website to function properly. These cookies ensure basic functionalities and security features of the website, anonymously.
Functional
Functional cookies help to perform certain functionalities like sharing the content of the website on social media platforms, collect feedbacks, and other third-party features.
Performance
Performance cookies are used to understand and analyze the key performance indexes of the website which helps in delivering a better user experience for the visitors.
Analytics
Analytical cookies are used to understand how visitors interact with the website. These cookies help provide information on metrics the number of visitors, bounce rate, traffic source, etc.
Advertisement
Advertisement cookies are used to provide visitors with relevant ads and marketing campaigns. These cookies track visitors across websites and collect information to provide customized ads.
Others
Other uncategorized cookies are those that are being analyzed and have not been classified into a category as yet.
SAVE & ACCEPT